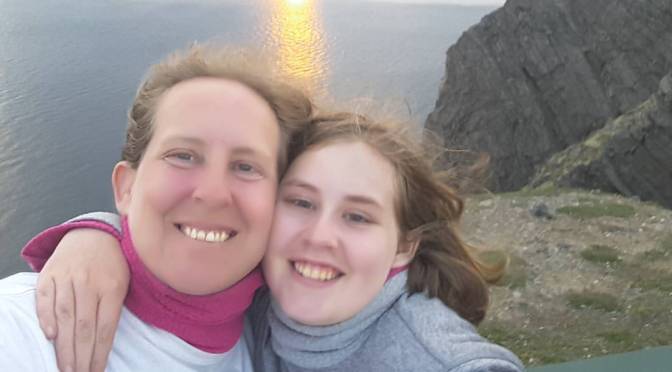 Sofia, as with Africa, exceeded expectations with regards to her ability to cope with the travelling, this time on the not so comfortable pillion seat of a solo motorcycle.   I am enormously proud of her ability to accept the challenge and to see it through and she was perhaps even more determined than I was to get to Nordkapp and Gibraltar than I was and it was wonderful to see her sense of accomplishment when both these goals were achieved.

The biggest achievement for me though, was to see her actively involved in the process of travelling and sharing the experience of achieving these goals.   For the first time she was actually aware that there was someone else in her world sharing the same experience as her, and more than that communicated that in a normal way by grabbing me around the shoulders for the picture in Nordkapp which had been a particularly challenging day to get there.

It was also wonderful to reaffirm the value that this type of travel has for her as in the space of 2 months she went from a stressed child overly concerned about her social situation with her peer group, to a confident relaxed child who didn’t need so much social validation and instead was feeling in control of her social environment.

All this said however, it wasn’t the easiest of trips for her either.   The extreme weather conditions aside, she had me to deal with and I don’t take any prisoners!   Sofia is my child, I don’t see her as autistic, I see her in terms of her potential to be independent as an adult and I strive to help her to that end.   After the enormous success of Africa, and a year in high school, these two months were a good opportunity to assess where she was in terms of achieving this and this has led me to the conclusion that school process may not be to her best advantage.

For Sofia the school environment is very intense by virtue of seeing the same people almost every day for most of the year.   Because she is not getting enough down time to process the experiences she is having, she is not learning and developing from them (as I know she can and saw from the Africa trip) she is moving into ‘just cope’ mode and she no longer has the mental or emotional space to do anything else.

Sofia is now at an age where interests are now explored, art, science or sport being the 3 main categories that a child might fit into.  With Sofia it is art and drawing has always featured in her life as one of her strategies to cope with life.  She loves it, and she loves the praise that she receives from it.   However, her skill of drawing hasn’t developed much in the last 3 years.   There was a burst in Africa where she started to develop and use the skill to create Youtube videos, but that soon fell by the way side on our return to the UK and her return to school.

In recognition of this, one of the goals I set for her on this trip was to draw real things she could see (all her drawing is cartoon drawing so it was an opportunity to explore something different).  She really struggled with this though and in the end only did about 3 drawings.  I think if we had travelled for longer, after another month she would have started to do more, but 2 months was simply not long enough for her to relax and accept the risk of failure as a necessary part of the road to success.  She is so desperate to establish a positive identity with the world she doesn’t want any failure at all for fear it will reflect badly on her, so all her attention is focused on the facade of success not actually achieving it.

An other example of this is swimming – it is a huge achievement for her that she can now float in water and can doggy paddle.   So in her mind she is now a champion swimmer and she wants you to think she is a champion swimmer with no further exploration in the skill of swimming.   Whilst her achievement in swimming is fantastic, she is neither a champion swimmer, nor has she fully explored her own potential in swimming.  So on this trip  I did not allow her to believe that she had achieved the pinnacle of achievement when she clearly had only reached base camp and needed to accept the challenge that she could in fact do more and take that journey.

One of things that makes it hard for her to take the journey is her inability to choose what she focuses on because her focus is so intense.   So this next school year I have now got her into a routine of mediation, exercise and interest endeavours out side of her normal coping patterns (she still has her coping patterns but the time she spends on them being reduced).   I am hoping that by her improving her mental and physical coordination and organising a specific time for exploring her artistic interest, that her general ability to focus and achieve is improved and the overwhelm of the social environment diminished.   After a year of this, I will do a rain check and see where she is at before committing to any further plans.   What I do know is that for my own sanity, it would be better for her to stay in school, but if that means that it will compromise her ability to be an independent adult with a skill to support herself, then I will  have to another way for her to get there.

There is another goal, however, that she has now put on the table which is not affected by any of this.  She wants to ride a motorbike and when I suggested that she could ride her own bike around the world she became really excited by the idea.   So over the next 6 years, slowly but surely, she is going to become a biker.  Whether she is good enough to ride around the world, for me, is not important, being able to get on the bike and go somewhere independently would be an amazing achievement in itself and no doubt as she passes each milestone on this journey I will be celebrating it here – first things first though, she needs to learn to ride a bicycle!

For my part the Africa with Autism book is now making solid progress as project ”Sofia Around the World” starts to look like not only an autistic mountain to climb, but a financial one as well!

A big thank you for all the donations received to help us on The Crooked Foot Adventure, with a particular thank you to our benefactor who has supported us since the beginning of our big adventures and without whom none of this would have been possible.  Thank you!

If you would like to make a donation and help us to continue to raise awareness for autism please visit the following link: