Travelling through Europe is going to be a different experience to Africa, mostly in terms of the costs involved.  When you are looking at camping grounds in peak season charging extortionate prices to pitch a tent, and that is even if they have a pitch in peek season, then other options have to be looked at to bring the costs down.  Wild camping is the obvious solution.

I had planned to do wild camping in Africa, but when the chips were down, we only did one night in the wild in Sudan, so I can’t really say that I’m savvy with the experience.   And whilst Africa doesn’t necessarily demand that you ask someone where you pitch your tent, one can’t get over the feeling that it may be inappropriate to do it and it is that feeling that I needed over come.  I want to be able to feel comfortable, whether the situation required permission or not, to pop up a tent with out paying a penny in return for the space being taken for the night.

So with Sofia on Easter holidays from school, I put together some kit, bought a new tent, and set of in a geneneral direction of Wales via Mick the mechanic to pick up a new battery for the bike, to get some wild camping experience under my belt.

The first night, Mick pointed me in the direction of an old Roman road.  We parked up just where the traffic was stopped, at the entrance of a field.   It was a beautiful spot if not a bit exposed to the wind.  It was about 6pm when we arrived, so thought it would be polite at least to only put up table and chairs and wait to see if anyone would take humbage at our presence.   As it was, we had one dog walker pass, a dirt bike rider who stayed and chatted for a bit, and what was likely the farmers wife who rolled up turned around and left with out saying a word – just checking to see what was going on.

It was really cold that first night.  We slept reasonably though once we employed the sleeping bag hoods, pulling them so tight so that only small  holes were left to allow air in.   I had not done any shopping, so in the morning, we simply packed up to warm up, and moved on towards Shropshire.

We stopped in Ludlow for a lovely hot drink in the town square, and then I proceeded to get lost trying to leave as the road that took us in the right direction north of Ludlow was closed, so instead we found ourselves heading south down small country lanes.  It was at this point that I noticed that the rear tyre was quite flat.  One might wonder why I had not noticed it getting soft earlier, but to be honest, despite the many thousands of miles travelled, I’m still not confident enough to say that it is the bike and not my driving!

A very soft tyre in the middle of nowhere, but still going, the best solution was to keep driving finding the shortest route out and to a garage.  Hoping we would make it.  But no sooner onto a main road, and the tyre finally gave way.  Main road was better than a narrow country lane, although, someone did point out that help would be at hand from a local farmer.  As it was we waited a couple of hours for help to arrive and changed the wheel as the all the spokes on the rear had come loose.

Deflated whilst waiting for help – elated when back on the road, all was well again and we were moving.  I headed towards a really cheap campsite for the night as it was getting late, but on the way, saw a chap cleaning his car and asked if he knew of a nice farmer who would let us camp in a field.  He pointed me in the right direction, and before long we found ourselved in another lovely location.

It was another very cold night, and the need for a hot shower to warm up was beckoning.  So after a slow start we headed off to Wales and this time in search of a camp site with showers.

The riding had been fantastic since we had left the M5, but as we entered Wales it got even better.  The roads are a real joy of twisties.  We took a back road and I pulled into a campsite.  £24 for the two of us!  this was far too much so kept going.  The next one was a more reasonable £17 and yet again a wonderful location beside a lake, and the enormous campsite was virtually empty.   I made a big meal to sustain us and then went down to the pub for some wifi, hot chocolate and a fire. 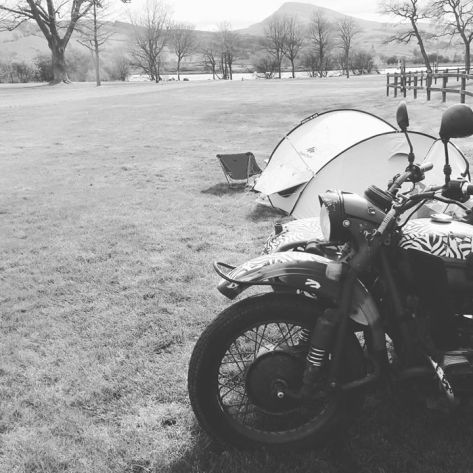 The night was less cold and in the morning we were up early eagerly ready to warm up in a lovely hot shower.  6.30am no hot water, 7am not hot water, 7.30 am not hot water, finally at 8am the water wasn’t freezing, but hot would have been a gross exagerattion – we battled on, sorely dissappointed.

I had by this point a message from Rik in New Quay suggesting we come down and meet his local Mencap organisation who are a locally run charity providing much needed services to the community.  So through broken data reception, I said we were on our way.

We had another great ride, if not for the rain at the beginning and the wind in the middle, the sun came out and warmed us up at the end.  It was lovely meeting Mencap Ceredigion over Honey Icecream, a local speciality and very nice!

Of course we jumped (Sofia far more than me!) at the sofa bed and hot shower!  It was a fantastic evening meeting his daughter and very talented artist wife, Yats.  Warmed up and with full bellies from real home cooked food (camp food never quite makes the mark) we then set off along more winding roades to Devon to meet up with Max (www.traveldriplus.com) and a prearranged stay with his family on their lovely Devon cottage farm in the middle of nowhere.

Max is an avid adventure rider, and always off the far flung parts of the world riding bikes so it was great to sit down and chat about what I had been thinking about and of course the recurring question, first raised at the MCN bike show, did I want to continue on the Ural or was it time to do something different.

We wieghed up the pros and cons, and really it boiled down to two very simple points.  First was that Africa became a story about the bike instead of Sofia, and whilst that was perhaps not such a bad thing as Sofia was content to hide behind her helmet, it was likely that it would be a trend going forward, and that really wasn’t what my intention was, I wanted the focus , mine in particular, to be on her not on the bike.  The other salient point was that the cost of the bike far out weighed its value in terms of Africa as a whole.  We ended up having to curtail our expenses to cover the costs and whilst there were some lovely upsides to that in terms of people we met, that really wasn’t something I wanted to continue going forward.  I want more money spent on Sofia seeing the world, and less on surviving another fix to the bike in terms of time and finances.

It is now time to sell the bike.

I had had many of these thoughts, but it was nice to hear them coming from someone else who understood all the ups and downs of adventure travel, a kind of permission slip to move towards and to different experience.  An experience that would have a different set of challenges for Sofia and I.  It was time to go on a solo.

We talked about kit and organisation for a solo bike and I was glad that Sofia was there listening in and taking on board that she would be taking far more responsibility for her own stuff, and chatted about potential bikes to consider.  We ended up staying another night!

Finally we headed off home the following day, invigorated with a new plan and the potential of new experiences, I wanted to start the ball rolling – I actually don’t mind what bike we end up doing Europe on, and with such a tight timeline, it is likely to be the Ural, but still, my head is now on pastures new, exciting possibilities, and it is unlikely I will not rest until they are realised.

What am I excited about?   Planning a round the world trip to start next year.  Sofia will be the first kid to do it pillion on a motorbike.

Please support us on Patreon:  https://www.patreon.com/AfricaWithAutism